RSS
Written by RUN:TRACK:RUN 10709
Created 26/12 -21Dec 26 -21
Races across the world focus on time. PB’s and paces and medals are always based on how fast it takes a runner to move their body from the start line to the finish line.

But sometimes, there are records based on more than just time. This post will look at some of the funniest and most interesting novelty world records we’ve seen in running.

If running has become too easy for you, consider increasing your challenge by running with an egg and spoon! These types of records aim to test a competitor’s ability to run while balancing an uncooked egg in a teaspoon. This may seem like a silly thing to strive for, but the skill needed to hold your balance like this while running is no joke!

Some of the different types of records that fall into this category are:
Fastest egg and spoon mile: 5 minutes 27 seconds held by Stefan Ritte at Lake Aasee in Germany on 14 September 2013.

Fastest egg and spoon mile, holding the spoon in your mouth: 8 minutes 2 seconds held by David Rush in Boise, Idaho, USA on 4 April 2018.

Fastest marathon with egg and spoon: On 23 April 1990, Dale Lyons from Meriden, UK ran a marathon while holding an egg and spoon in 3 hours and 47 minutes.

Largest egg and spoon race on stilts: 55 people competed in this event in July 2006 in London, United Kingdom.

We’ve all seen people in fancy dress costumes at races, but did you know some of those outfits had world records associated with them? If you have a Santa Claus suit, consider putting it on before your next marathon. You might find yourself in the Guinness Book of World Records.

Some records have been made by running distances, others by the total number of people that have participated in an event that requires a Santa Claus costume:
Fastest marathon dressed as Santa Claus (male): 2:49:21 was run by Paul Fernandez In Abingdon, United Kingdom, on 20 October 2019.

Fastest marathon dressed as Santa Claus (female): 3:43:20 was achieved by Amy Smith at the Portsmouth Coastal Waterside Marathon in the United Kingdom on 22 December 2013. 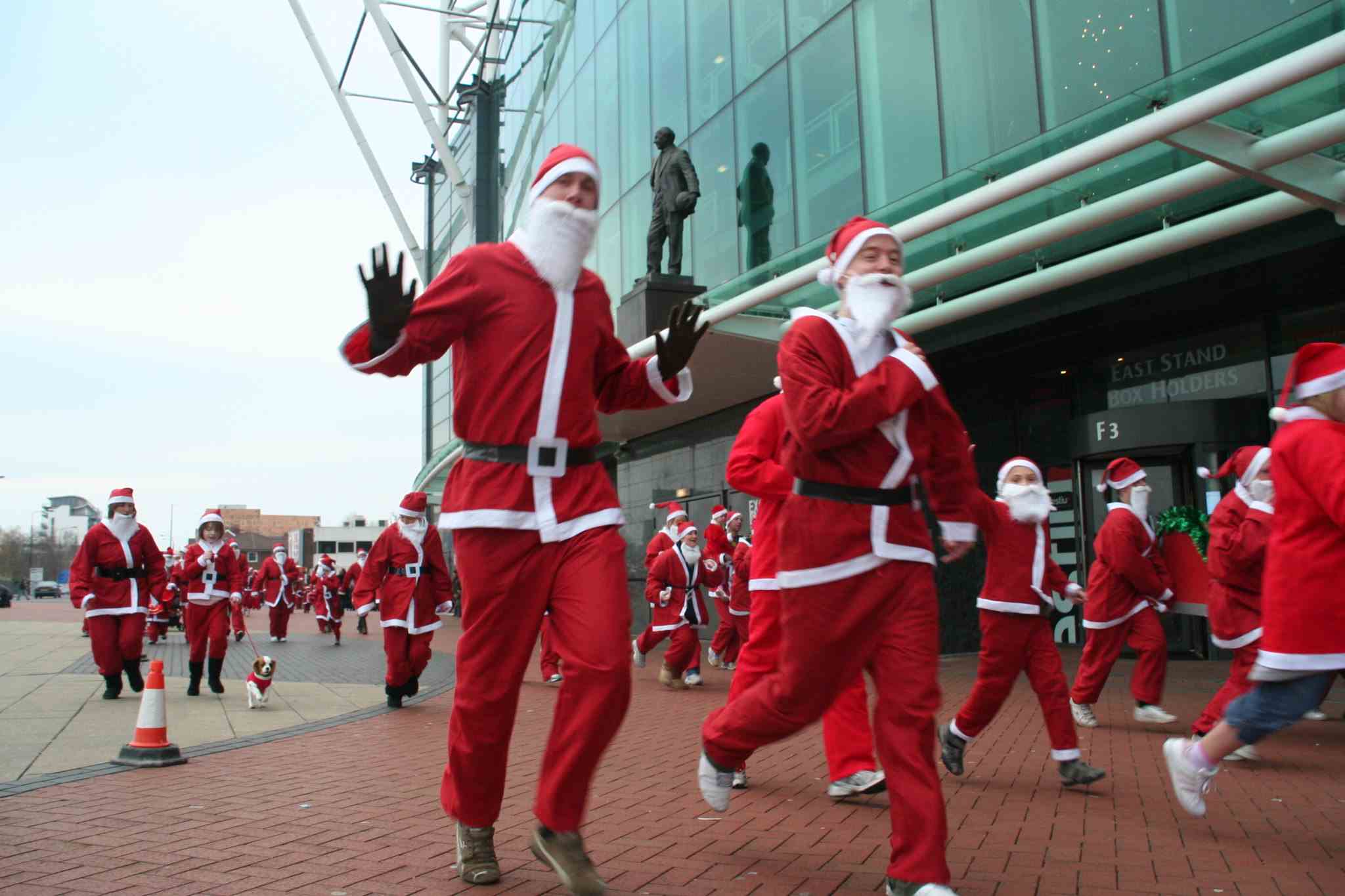 Running backwards is hard! These records start with just plain backwards running, then they get progressively harder as people set records doing various acrobatic challenges while going backwards. Most runners just want to keep going in the right direction!

Fastest mile backwards: Aaron Yoder set this record on 23 November 2015 in Lindsborg, Kansas, USA. He ran a mile, backwards, in 5 minutes and 54 seconds.

Fastest run backwards across the USA: If you thought running a mile backwards was impressive, Arvind Pandya of India ran across the USA from Los Angeles to New York completely backwards. He did it from August to December in 1984, holding the record of 107 days. He’ll probably hold that one for a while!

Fastest marathon, backwards, while joggling three objects: 5:51:25 is the time it took Joe Salter to achieve this record at the Quad Cities Marathon in Moline, Illinois, USA on 22 September 2013. He was joggling three small balls and only dropped them twice over the course of the entire race.

We’ve already seen Santa Claus as a record to work towards as an individual costume. There are many other similar records set by people dressed in superhero costumes, animal costumes, and much more.

Group costumes take things to a whole new level. Not only do these participants have to run a race in a movement-hindering outfit, but they also have to do it with a group of people. The rules for these records are strict, it can’t just be a group of people in the same costume. There has to be one costume, in which all members of the group are somehow connected together to create the team unit.

Fastest marathon in a 4-person costume: At the Hull Marathon in Kingston upon Hull in the United Kingdom, on 23 September 2018, four British runners came together dressed as a caterpillar. They were able to finish the marathon in 4:03:08, which would be an impressive time for an individual let alone a group tied together!

Fastest marathon in a 5-person costume: On 19 November 2017, five British runners dressed up in a Chinese Dragon costume to run a marathon in Walton-on-Thames in a time of 4:21:30.

Fastest marathon in a 10-person costume: the Marathon Mamas of the UK took on this challenge on 15 April 2018. They dressed as a boat, with each mama runner wearing an outfit inspired by Disney’s Moana. Their total time was an impressive 6:55:40.

Fastest marathon in a 40-person costume: This one really brought a team together! 40 people came together from a running club called the Rat Race Marathon Marauders to dress up as a Viking ship on 14 October 2018 in York, United Kingdom. The costume was over 200kg in weight and 25 meters long. It looked like one big Viking ship, with each runner inside wearing a Viking hat, and attached to the costume through an intricate harness system to distribute its weight.

All of these records show us that running doesn’t have to be limited to one goal – time, pace, and winning. Many of the athletes mentioned above committed to working towards their records in an effort to raise money for charities they believed in. Bringing attention to your training, and doing so in a fun and fanciful way, can help highlight the sport of running as a means to impact causes and bring people together.

Of course, there are plenty of world record holders that are simply doing it for fun. And we think that is just as valid of a reason to pursue a world record. Running is and should be fun!