Spectacular Tracks Around the World - runtrack.run

Spectacular Tracks Around the World

We like to think that running tracks are consistent. They certainly should be precise in terms of distance, but here at RUN:TRACK:RUN we know that no two tracks are ever built the same, nor do they ever offer the same experiences. Some of the differences are due to maintenance issues or consistency of upkeep. Others are due to the surrounding amenities or the location.

The qualities that can truly differentiate a track are the things that make it memorable. Sure, the standard 400m distance might be repetitive, but running a new track in a new place might be one of the most unforgettable parts of your trip.

In this post, we’ll highlight some of the most unique tracks around the world, and give you some tips on how to visit them and what to do when you’re in town.

If you’re ever in Osaka, head over to the Morinomiya Qs Mall if you’re looking for an impressive track to try out. This mall is located next to Osaka Castle Park, a landmark in the city. The mall has a fitness center inside, where you can find the track. The coolest thing about this track is that it is on the roof of the gym and portions of it are suspended over the crowds below.

If you’re out that way, be sure to visit Osaka Castle, one of the most important historical sites in Japan. The castle dates back to the 16th century and has been the location of many significant events.

Be aware that this track is 300m, so if you need a standard 400m, best to keep looking.

Did you think running track had to be repetitive? Did you assume every track had precise planes and distances and all you had to do was show up and run? Well, think again, because this track has a hill!

Located in the southeast corner of the Iberian Peninsula, the town of Elda, Spain is home to the Pista de Atletismo. The outdoor track here is a standard 400m track, but on one side you can shoot off the track to run up and down a hill that stands alongside the track. The hill is built in. You are not leaving the track and running up some random hill. You can choose between running the proper oval shape of the track, or shooting off to the side a little bit to take on the hill. The terrain of the hill is the same synthetic track material used in the 400m loop.

This is a great way to add a challenge to your interval training, and a fun way to mix up your track workouts!

If you want a dash of history with your workout, the track at the Panathenaic Stadium in Athens is a must-run. This stadium held the first modern Olympic games in 1896. The entire stadium is built of marble! It is one of the main tourist attractions in Athens, a city full of historically important tourist attractions. 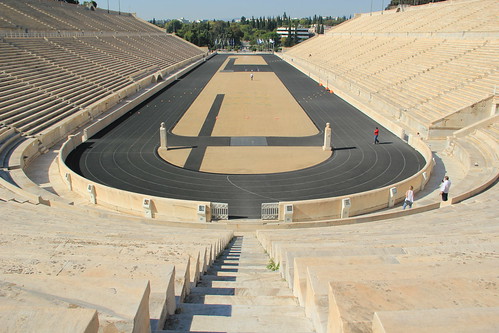 
The stadium is also the finish line for the Athens Classic Marathon, so its importance in the running community is well known.

Because the stadium is a heavily visited attraction, the track is only open to runners for a few hours in the morning. For a small entrance fee, you can have the experience of running a track once ran by Olympic athletes over a century ago. Then, stay for a tour!

This beautiful track is surrounded by dozens of marble statues that were created to represent the different sports that can be played at the facility. They were built to symbolize the ancient Roman gods, so if you fancy a workout while being looked upon by massive marble gods with track and field apparatus, this is the track for you!

The stadium itself was built in the 1920s during the rule of Mussolini. It was a facility for the Fascist Academy of Physical Education, which is also why the foreboding marble god statues were built. Luckily, the complex ownership has mellowed a bit as it now belongs to the Italian Olympic Committee.

The track is open to the public. Given that it is also a beautiful location to visit and learn some history, what more could you ask for! The track is also surrounded by rows of seats that are made out of marble. They are quite an impressive place to watch some great running. 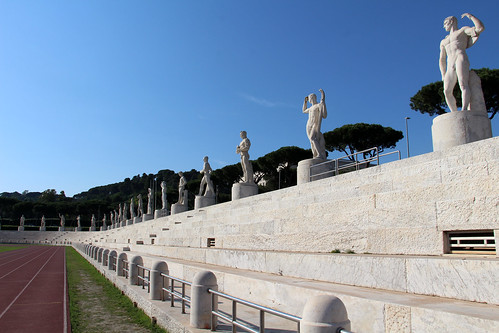 Medellín is a city well worth visiting. The second largest city in Colombia, behind Bogota, is overflowing with interesting things to see and do. You can take the Medellin Metrocable to get a bird’s eye view of the city from the comfort of your cable car. There are dozens of museums and galleries to visit, as well as many parks to relax in.

The Atanasio Girardot Sports Complex is a huge facility that includes multiple stadiums, a baseball field, football fields, a martial arts complex, basketball and volleyball courts, and much more. The track there is a great place to get your speedwork done. But once you’ve completed your running workout, take some time to explore all of the other amenities that this impressive facility has to offer.

Then, when you’re all tired out, head to the city for a great dinner and some amazing nightlife locations! 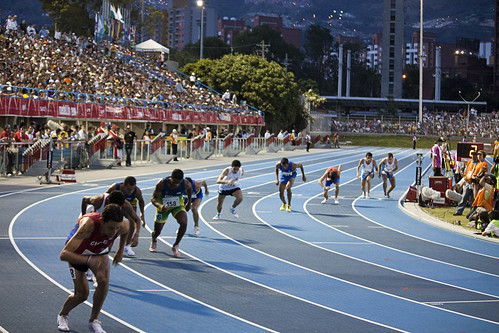 Iten, is the heart of the Kenyan running world. It is a small city where many of the biggest names in Kenyan distance running go to train.
The track is a simple gravel and dirt loop, but don’t be fooled by the appearance. Some of the best runners in the world have trained on the track and will continue to do so. Iten is a popular destination for training because it is at a very high altitude of 2400m or almost 8000ft. Runners say that if you exert yourself at this altitude, once you get back to sea level, you’ll feel like you are flying!

This track has huge historical significance in the running world. It was here that Roger Bannister broke the four-minute mile barrier in May of 1954. The track is located in Oxford and is also known as the Oxford University Track and was previously titled the Iffley Road track. But the official name was changed to Roger Bannister to record his accomplishment, as breaking the four-minute mile was something that many thought the human body would never be able to accomplish. The feat has now been accomplished more than 1500 times. Once Roger Bannister broke the threshold, the floodgates were open to more people taking on the challenge.

Oxford is a great town to visit. It is obviously famous for the university there, but there are plenty of other reasons to visit. There are great museums, as well as the Oxford Castle & Prison. You can stroll through the quaint town and enjoy a coffee after your run.

Located in the University City zone of Mexico City, this huge stadium was built in 1952 in order to host the Pan American Games in 1955. Later, it was the home base of the 1968 Summer Olympics. The area is called University City because it is the campus of the National Autonomous University of Mexico (UNAM), which is the largest university in Latin America.

The stadium is architecturally interesting, as it has an impressive structure and a huge capacity for 72,000 people. One of the walls of the stadium includes a mural painted by Diego Rivera, a famous Mexican artist.

Mexico City is also at a high altitude of 2250m/7300ft. This means that training here can bring huge benefits to anyone competing in events held at lower elevations.

Running track doesn’t get the credit it deserves for being interesting, exciting, and different. We hope that this small sample of all the many spectacular running tracks that exist around the world has encouraged you to go visit some of them. When planning a vacation, many people focus on the tourist attractions that they want to see. We think that you should add research about the running track options in the place you’re visiting, in order to add a new and unique experience to your vacation. There’s no better way to get to know a city than to run in it, and finding a track that has historical significance, cool features, or a great story behind it is a great way to add to the memories you’ll be making on your trip!